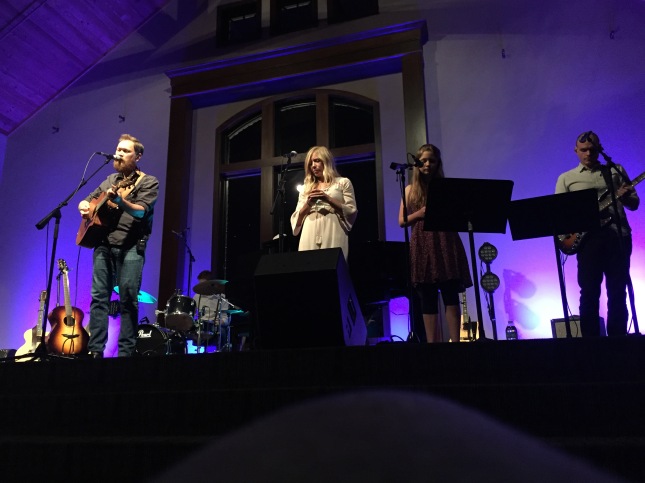 This photo was taken was during “The Rain Keeps Falling” at Andrew Peterson’s release concert for his new album, The Burning Edge of Dawn in Nashville, TN. This photo is special to me because I can’t wait to show it to two of my newest bosom friends. Let me explain:

A couple of weeks ago, I was at a women’s retreat. We were in breathtaking Estes Park, CO. The towering pines and aspens resplendent in pinks and oranges along with the rippling brook and placid lake were all together too beautiful. The first afternoon we were there, I was walking toward the meeting room and happened to glance over my shoulder at an area near the stream. There was a patch of sun highlighting a small grassy area and it fairly glowed. It was framed with the branches of a tree. The earth was shouting to me, “I AM.” It was one of those scenes that I (as a former professional photographer) would not even attempt to capture because the camera’s sensor, though advanced, could never hope to capture all the myriad of shades of color that my eyes perceived. It was one of those moments you have to commit to memory. One that tugs on your heart strings for no apparent reason other than indecipherable beauty.

I had pre-ordered The Burning Edge of Dawn, and this order came with a bonus instant download of three songs, one of which was “The Rain Keeps Falling.” I had this song running through my head all weekend during the retreat. Three or four times, parts of the song would come to me as one of my friends was sharing during our small group sessions. She wasn’t really a friend–more like an acquaintance. We were both on the worship team for the retreat.

I had this uncomfortable feeling that she needed this song. I HATE stuff like that. It reminds me of my grandma giving me books that she thinks I need to read. It’s a nice gesture, but also a bit presumptuous. It always made me feel like she had observed something wrong with me–an area in which she had determined that I needed growth, and then came up with a prescription for me. (Grandma, if you are reading this, I really do appreciate the thought! And, I love you.) This particular friend had lost someone close to her and had been hurt by church people handing her platitudes like “Just remember that God is good.” Knowing this made me even more fearful to “prescribe” a song for her.

And so, against my better judgement (and desire to be liked), I asked her if she might be willing to listen to this song with me. As is sometimes (often?) the case with me, my timing was poor. Worship team practice had just taken up an hour or so of the only free time scheduled for the weekend, so we decided to listen to the song later.

After the last meeting that evening, “later” came. We went outside and another friend joined us. I felt even more pressure and almost embarrassment because the act of putting it off and subsequently coming back to it seemed to build up anticipation. It was obviously “kind of a big deal” to me, and it made me exponentially more nervous than it should have.

We sat at a picnic table outside and I hit “play.” The night air had gone cold in the absence of sun. I was shivering, probably from more than just the temperature. To add to the awkwardness, as soon as the song started, I began blubbering. (I basically tear up at everything in this season of my life. It isn’t from pain, it’s more from a renewed sensitivity to life, but that’s for another post.) I just put my head down and kept as quiet as possible.

When it was over, I looked up sheepishly, terrified that they would say, “That was nice! Thanks for playing it,” and I would feel so foolish for going out on this limb. Somehow, I felt as if I were exposing my soul to them, and that the chances of a real connection being made were slim to none. As I gradually looked up to meet their eyes, I was relieved to see that they, too, had succumbed to tears. Not the pretty kind. They matched me in all of my snotty, slimy glory. It was a beautiful and humbling moment.

We spilled our guts for several hours and all three of us shared stories of the excruciating pain that we have weathered over the past couple of years. We spun tales of deep wounds without trying to put a positive spin on it (as I am sometimes tempted to do). No one offered trite answers, yet there was no wallowing. It was bare naked brokenness, the kind that cleanses the soul. Near strangers experienced life-giving intersection that night. (Now, after attending Hutchmoot, I am tempted to call it some sort of divine pre-mootery training).

After an hour or so, I felt prompted to share a short essay I had written the week before. I had been on a sort of silent retreat. I awoke one morning with a picture in my head. It (of course) made me cry and I was compelled to attempt to capture it with words. Strengthened by the level of connection in our conversation, I was bold enough to pull it up on my phone and read it to them. I said:

“Today I began to see myself as a teacup. A teacup that is a gift from God, but that is me. When, as an adult, I decided to follow Jesus, he presented me with this cup. It was an exquisite cup, with graceful filigrees and lovely designs and I was quite taken with it.

Into it he poured all the experiences I have had with Him. It held all the things I have learned about Him, and the wisdom that encounters with Him has brought about. I was safe, secure, and overjoyed with my cup.

Throughout the next fifteen or so years, I pursued Him, and He pursued me. My cup began to fill with the weight of glory. I grew in my practice of the fruit of the spirit, I grew in many ways.

Then, one day, a fissure appeared in the shiny porcelain of the cup. Without warning the cup burst with an explosion that shook every part of me. I, along with all the contents, was jettisoned from my safe, beautiful cup and began a free fall. I didn’t know what was below, what would catch me, if anything.

During this free fall, all the things I knew that I knew were somehow out of reach. I had to reexamine the very truths that had been life blood to me for many years. Everything seemed like a mirage, without substance. Finally, slowly, painfully, I and my truths landed.

Bloody and bruised, I began to explore this new landscape. It was shiny and white, and stretched farther out than I could see. I slipped and fell as I walked around. Eventually I began to realize that this new place is my new cup. In a puddle at the bottom are all the things from my old cup. They look different now, after having been rearranged in the fall, but I can still recognize them. This teacup is vast. It is fiercely beautiful. I wonder at the thought that one day it, too will be full and burst, unable to withstand the weight of glory.”

Once again, I looked up sheepishly. Once again, they were both as slobbery with tears as I. One said, “You just described my 2014.” There is an uncanny lightening of the spirit that comes with this type of communion. I woke up the next morning with Galatians 6:2 in my heart: “Carry each other’s burdens, and in this way you will fulfill the law of Christ.” Nothing in any of our situations had changed, yet it seemed that we had collectively grabbed onto the hope that maybe, just maybe, the tiniest bit of light had begun to peek over the horizon. Maybe these dark seasons in our lives were beginning to come to an end. And even if not, our hearts were mysteriously lighter.

There was magic in the air that September night. As I look back even now, the awe I felt watching kindred spirits intertwining seems like a tangible thing. I am changed. We are changed. Now, I have to show them this photo from the concert. I know it will mean as much to them as it does to me, because we have communed together.

Incidentally, this prompted me to write a song. This is the first song I’ve written in a long while. I recorded it in my room while I attended Hutchmoot. It is a technichally challenged one-take version of this song recorded on my phone. My guitar playing leaves much to be desired. Still, I wanted to capture the raw emotion and feeling I had when writing this song. And what better place to record a song than Nashville?

The experience I have described here, as well as a number of others in the past month or so have reminded me of the hunger and thirst for writing that was buried deep within. It emerged when I was a child, and grew as I was a teen, but it feels like it has been in a coma for at least a decade. I can hardly sleep these days for the onslaught of words and rhyme and truth that are clamoring to be put together with music in my mind. It is with great anticipation that I write this, my first blog post. May this longing in my heart for what is good and true spur me on to create things that will point to the one true story.